Chainlink: One Chain to Link Them All

Chainlink is a decentralised network launched on Ethereum in July 2017 by the company SmartContract with the aim of bringing smart contracts to their full potential by integrating them with the web.

SmartContract is a for-profit company founded in September 2014 by Steve Ellis and Sergey Nazarov to build Chainlink.

In June 2017, Nazarov and Ellis launched Chainlink and in September of the same year, with the help of Ari Jules, a consultant to the company, they released the network’s white paper.
A few days after the release, the team launched an ICO which raised the equivalent of $32 million corresponding to approximately 35% of the total supply of the network’s cryptocurrency, LINK.

Sergey Nazarov is known for always wearing the same checked shirt during his public appearances.

Smart contracts are software on blockchains that trigger specific transactions when certain conditions are met. They are the technology behind Dapps, Decentralised Applications.

The idea is to develop Dapps that are not just about sending value on the blockchain, but that can have a wide scope, just like the traditional apps we are all familiar with.

To do this, smart contracts and Dapps need access to data that is not available on the blockchain on which they are based. They require a channel of communication with the data source they are interested in.

As smart contracts are not able to connect autonomously to the main external (off-chain) data sources, such as APIs, they need Oracles to retrieve them.

In ancient Greece, oracles were holy figures who interpreted the will of the gods and transmitted it to the people. The role of the oracle is to connect the real world to the blockchain network, without violating its integrity.

Off-chain data needed for some smart contracts application cases could be for example:

… and any other type of data that can benefit from the use of smart contracts.

Some blockchains supporting smart contracts have so far solved their need for oracles by relying on centralised providers such as Oraclize, others have developed oracles within their own ecosystem.

However, developing in-house oracles on blockchains that are not suited to do so from the start could lead to issues such as significant delays.

The problems with taking data from only one oracle, on the other hand, are mainly two:

The major limitation of this centralised system of connecting blockchain and real-world data lies in the fact that single oracles introduce a level of trust that directly contradicts the trustless nature of the blockchain.

In response to these two problems, Chainlink proposes a decentralised network of Oracles, in which data is evaluated by a larger number of suppliers and, consequently, is reliable and uncensored. In addition, the quality of the information is ensured by a reputation system that scores the oracles according to the veracity of the data they provide.

Chainlink’s Oracles system is compatible with any blockchain via a middleware that acts as a bridge between them.

Middleware is a software that acts as an intermediary between two applications or services to facilitate their communication.

Among the many Chainlink partners that have adopted this integration to take advantage of the Oracles and other Chainlink use cases are well-known DeFi projects such as Polkadot, Synthetix, AAVE, Tezos and non-crypto giants such as SWIFT and Google.

In August 2021, Chainlink introduced an important integration to facilitate interoperability between blockchains. Interoperability is crucial for the DeFi industry, which is producing Dapps of all kinds, including NFT-powered ones. As these Dapps become increasingly complex, they require the cooperation of multiple protocols, decentralised services and technologies to speed up innovation. These kinds of Dapps that make use of 2 or more blockchains are called cross-chain Dapps.

Chainlink’s interoperability protocol facilitates cross-chain communication and token exchange, a functionality that too few blockchains offer compared to the demand that has emerged in 2021.

If you hang out on Twitch you will have heard this term before: RNG (Random Number Generation). In a broad sense, RNG refers to the mechanism that determines randomness in video games, i.e. the fact that an event is always different every time you play.
For example, if you are playing a card game, the RNG ensures that the cards are always randomly shuffled. In this way, you never have the same hand every time you play.

Complete randomness, however, is difficult to achieve. This is evident when you repeat a game and spot blatant patterns that seem to favour one outcome or the other.
In order to provide a cryptographically secure and demonstrably fair source of randomness, Chainlink introduced the Verifiable Random Function (VRF), which assures users of the application’s impartiality in-game dynamics.

From an economic point of view, Chainlink consists of buyers (blockchain) and data providers (oracles): the former select the data they want and the latter make an offer to provide that data.

The oracles have to stake a share of LINK tokens when they make an offer, which can be taken away from them if they misbehave. Once oracle suppliers have been selected, their job is to bring the correct answers to the blockchain/buyer.
LINK is Chainlink’s token, based on the Ethereum protocol, and is the currency used for transactions and payments within the network.

Chainlink, as its name suggests, connects blockchains with each other and with the vast world of the internet. Its numerous partnerships are proof of this, as are the various use cases and Dapps that rely on its innovative functionalities without having to worry about compatibility issues. 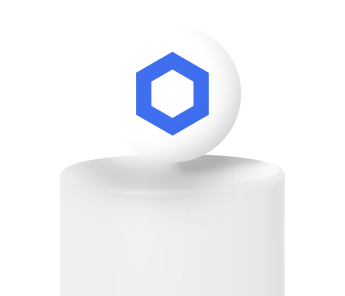