USDT is a stablecoin pegged to the US dollar price, issued by Tether ltd., a Hong Kong-based company. According to the company’s declarations, the peg of the token to the dollar is obtained through a dollar reserve equal to the number of USDTs in circulation.

Tether’s story is rooted in a previous project: Mastercoin, which we already know from the history of ICOs.

In January 2012 J. R. Willett publishes a White Paper online, in which he exposes the possibility of creating currencies on the Bitcoin protocol.
In 2013 Willet creates the Mastercoin cryptocurrency and starts the Mastercoin Foundation, later renamed Omni Foundation, to promote its use.

In July 2014 Brock Pierce, Reeve Collins and Craig Sellars announce Realcoin, a cryptocurrency based on the Mastercoin protocol.

Two of the founders, Brock Pierce and Craig Sellars, in fact, are respectively one of the original members and the CTO of the Mastercoin Foundation.

In November 2014, the project changes its name to Tether. The stablecoin linked to the project takes the same name and it’s pegged to the dollar.

Tether Limited later developed other stablecoins similar to Tether USDT but pegged to the Euro and Japanese Yen.

Tether achieves immediate success and is listed on the best exchanges during the following year.

J. R. Willett is a software developer and an American blockchain enthusiast.
He takes an interest in the world of cryptocurrency in 2010 and begins to pay several people to mine Bitcoin.
Later, in January 2012, he publishes a White Paper in the Bitcoin Talk forum called “Bitcoin’s Second White Paper” in which he proposes to create new cryptocurrencies based on the Bitcoin protocol.
Since 17 months after publication, no one had developed his idea yet, in 2013 he creates the first ICO in history to demonstrate that it would work.

The Mastercoin ICO raises over half a million dollars in Bitcoin.

Brock Pierce is an American entrepreneur and actor born in 1980 in Minnesota.
At the age of 17, he leaves cinema and reinvents himself as a digital entrepreneur.

From the entertainment sector, with the Digital Entertainment Network, he moves to the gaming sector with Internet Gaming Entertainment and finally, in 2013, he enters the world of cryptocurrency.

From that moment on, Brock Pierce founds and contributes to the founding of several companies operating in the cryptocurrency sector including Tether, Block.one and Blockchain Capital (BCC).
In 2015 he even becomes Chairman of the Board of Directors of the Bitcoin Foundation.

On 5 July 2020 Brock Pierce stood as an independent politician in the 2020 US presidential election.

The value of Tether is guaranteed by Tether Limited’s reserves of dollars and other assets.

Every tether is always 100% backed by our reserves, which include traditional currency and cash equivalents and, from time to time, may include other assets and receivables from loans made by Tether to third parties, which may include affiliated entities (collectively, “reserves”).

Tether is among the top 10 cryptocurrencies in the world in terms of market capitalisation and the first stablecoin on the market (August 2021)
Tether’s widespread adoption stems mainly from its adoption as a tool to manage and hedge the risks associated with cryptocurrency volatility.

Tether plays an essential role in the development of the new decentralised finance sector.
Although not a DeFi protocol, USDT is widely used in DeFi protocols such as Aave, Curve, Solana, CREAM Finance and Uniswap.

Historically, DAI has always been the dollar-collateralised stablecoin most used in DeFi, followed by USDC. The entry of the most popular stablecoin in the sector, USDT, could, however, change the picture.

Since Tether is a very liquid stablecoin, it can compensate for the current shortcomings of DeFi. 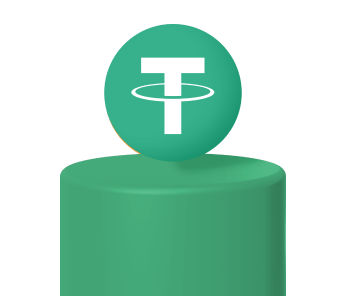