Aave: Loans According To Decentralised Finance

Aave is a DeFi project that enables lending, borrowing and earning interest on crypto assets in a decentralised manner. This lending system is built on the Ethereum protocol through a series of smart contracts.

Specifically, lending is done via the Aave protocol, which supports over 17 cryptocurrencies.

From ETHLend to Aave

Aave is a for-profit company founded in 2017 by Stani Kulechov and based in Switzerland. Kulechov studied law in Helsinki and created Aave while still a student. Aave, in fact, means “ghost” in Finnish.

The company, originally called ETHLend, raised $16.2 million in an initial coin offering (ICO) in late 2017, during which it sold $1 billion worth of LEND.

The remaining 300 million pre-created LEND was set aside for the company’s core team.

ETHLend was different from Aave in that it matched lender and borrower with a peer-to-peer system. This mechanism was too slow as it used to take time to find a counterparty for each user.

In 2018, the first peer-to-contract protocols appeared, eliminating this problem by making borrowers and lenders interact with a smart contract. This is how ETHLend switched from p2p to peer-to contract and rebranded to Aave.

2020 is the year of the official launch, which landed on the Ethereum mainnet in January, after which LEND enjoyed the DeFi summer and in October the migration from the LEND token to the AAVE token was completed. In December of the same year, Version 2 of the Aave protocol was launched, with advanced integrations that make it even more flexible.

Early adopters and Aave’s tightest members of the community are called Aavengers, while the engineers of the Aave team are best known as the Aavengineers.

Loans from traditional finance to CeFi

Sooner or later everyone has to apply for a loan, whether to go to university, to buy a house or to start a business. You find yourself in debt and have to deal with interest rates and other bureaucracy.

Traditionally, the intermediary relied upon is a bank, whereas in the cryptocurrency sector there are some centralised platforms such as Blockfi or Nexo. The latter take custody of deposited cryptocurrencies or fiat currencies and lend them to institutional players such as market makers or hedge funds or other users of their platform.

Aave does the same thing, but in a decentralised way and based on the Ethereum blockchain. This allows autonomy from the intermediary and traceability of transactions.

On Aave everything is done through the smart contracts of the liquidity protocol. Let’s take a look at an example of how the loan is carried out, from the point of view of the two parties.

Annualised Percentage Yield is the actual rate of return on an investment in one year.

The APY is calculated based on the relationship between the available liquidity in the protocol and the demand to borrow. Each asset has a different APY that will have to be repaid at the end of the loan.

At this point, you might ask why the borrower should first provide more collateral than the loan it will later take out. What advantage can they gain from this trade?

Many people use this service because it allows them to have instant liquidity without having to sell cryptocurrencies that they need to hold at the time. Holding cryptocurrencies can be part of a strategy to avoid or delay taxation, or to continue to take advantage of staking services, while in the case of professional traders it can be a way of maximising market positions.

In addition, from a protocol perspective, over-collateralisation assures lenders that they will be repaid.

Another unique feature of Aave are Flash Loans, which allow you to borrow funds without having to post collateral.

Flash loans exploit a feature of all blockchains, namely that transactions are only finalised when a new block is accepted by the network.

The addition of each new block on Ethereum takes 13 seconds. A flash loan of Aave is both issued and paid off in that 13-second timeframe.

Here’s how it works: A borrower can request funds from Aave without collateral, but must return those funds, and a 0.09% fee, within the same block. If the borrower fails to do so, the entire transaction is cancelled and the loan does not take place.

In this way, neither the debtor nor the Aave protocol run any risk.

Use cases for flash loans are often related to trading strategies that exploit DeFi protocols. In particular, the most common practice is arbitrage, which involves making margins on price disparities between different exchanges.

Suppose a token trades for €10 on Exchange A, but for €10.50 on Exchange B. Assuming zero fees, buying ten tokens on Exchange A before selling them on Exchange B would yield a profit of €5. It is clear how on large volumes the profit multiplies.

Example of arbitrage with a Flash Loan

The concept of uncollateralised lending, even at the coding level, opens up a world of possibilities in a new financial system.

Use cases are quite limited at the moment, but ultimately flash loans have laid the groundwork for innovative new applications in decentralised finance.

In July 2021, Aave CEO Stani Kulechov said he wanted to create an alternative to Twitter based on Ethereum.

Benefits of the Aave token

In addition to having experienced an incredible bullish trend in the first month of 2021, which allowed it to stay above $180 at least until August, the AAVE token has a number of advantages within the lending system of the same name.

We have seen that Aave issues two types of tokens: aTokens, representing deposited assets that are issued to creditors so that they can collect interest on deposits, and the AAVE token, on which the ecosystem is based.

AAVE offers its holders several advantages. For example, AAVE borrowers are not charged a fee if they take out loans denominated in the token. In addition, borrowers who use AAVE as collateral get a discount on fees.

Last but not least, it is now possible to receive a periodic incentive in AAVE by staking it on the Aave app. We will soon publish a guide dedicated to this.

In November 2020, Aave invested in Pixelcraft Studios, the Singapore-based company developing Aavegotchi, an NFT collectible game inspired by Tamagotchi and developed on the Aave protocol. This is the company’s first official investment since rebranding from ETHland. 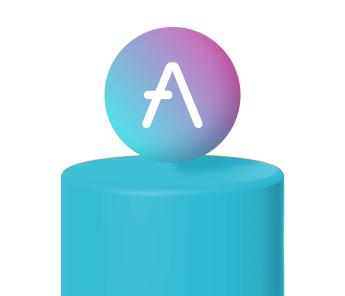