Launched on 7 October 2011 by Charlie Lee, a former Google and Coinbase employee who graduated from MIT, Litecoin is considered by many to be the first altcoin.

Litecoin was born on the basis of the Bitcoin protocol, but, although it is practically identical to the latter in terms of source code, it has some features that characterise it. On a technical level, Litecoin is in fact the result of a Bitcoin blockchain fork.

A fork is the updating of a blockchain to new rules. Depending on the changes made, it’s defined soft or hard. A soft fork occurs when the blockchain rules become more restrictive (e.g. from 1MB per block to 0.5MB per block) and it requires updating only by full nodes. A hard fork occurs when the rules become looser and it requires updating by both full nodes and miners. A hard fork causes a split in the blockchain, creating a new and independent one.

Charlee Lee’s origins are a prelude to his “decentralised” destiny: half Chinese and half American, he was born in the Ivory Coast, in a community of Chinese pioneers who had just landed after the end of colonial rule. When Charlie was thirteen years old, the family moved to Massachusetts where he followed in his father’s footsteps studying computer science and electronic engineering.

For a decade he worked as a software developer for Google, that is until he met bitcoin. In a Silk Road insert he read an article about a new currency, peer-to-peer and open source. It was 2011. He immediately involved his brother Bobby C. Lee, who in the same year merged one of the longest-running exchanges in the world, the BTCChina.

Before that Charlie Lee had already invested in gold, but he did not have a great opinion of the FED. When he bought his first bitcoins the price was 30 dollars, but unfortunately, it dropped to 2 dollars in a few days. When asked how this has not affected his faith in cryptocurrency, he simply replied that the fundamentals of Bitcoin had not changed.

He bought four GPU cards for mining with his computer and in the same year, he tried to launch his cryptocurrency, Fairbix. The project turned out to be a failure from the start, due to several technical problems. For Fairbix he chose to use Scrypt as a proof-of-work algorithm, the same one he would use in Litecoin.

In October 2011, less than a month after the failure of Fairbix, Charlie Lee launched Litecoin on the market.

However, today he admits that price volatility is an obstacle to its use for payments. Despite this, he does not believe that stablecoins, cryptocurrencies pegged to traditional assets such as the US dollar, are the answer. According to Lee, most stablecoins are more exposed to attacks because they are centralised and less resistant to censorship than decentralised cryptos.

Furthermore, Litecoin’s initial aim was to make mining accessible only with personal computer CPUs and, as a result, to avoid centralising the computing power in the hands of the major mining pools. One of Litecoin’s great strengths at the time of its release was also that Lee had only mined 150 of them. However, his attempt failed, because litecoin’s mining pools managed to take over and again exclude individual miners from the market.

Today, Charlie Lee is the managing director of the Litecoin Foundation, a non-profit organisation that includes members from all over the world whose common goal is to grow Litecoin and continue the fight for decentralisation and financial freedom.

Why Litecoin was born

Lee’s goal was clear: to give bitcoin a brother that could be used for everyday payments, from coffee to cinema.

The confirmation time per block is of 2.5 minutes, against the 10 minutes necessary to Bitcoin, and the maximum supply of coins is fixed at 84 million. Litecoin’s economic model is not based on scarcity, but rather on liquidity, so as to become a method of payment. Today we know that this mission hasn’t been fully achieved by Lee yet, but there are many shops that accept payments in Litecoin. The complete list is available on the Litecoin Foundation website.

In short, Litecoin is a “lite” version of Bitcoin or, as Charlie Lee himself says,

I wanted to create something that is kind of silver to Bitcoin’s gold.

After two years of stagnation at a few cents, in November 2013 the value of Litecoin rose to 50 dollars. The following year, however, Mt. Gox, one of the largest exchanges in the sector at the time, suddenly suspended transactions and declared bankruptcy, dragging Litecoin into bankruptcy. The price reached an all-time low of around $1.

After this moment of crisis, it remained stable at around $3 until the beginning of 2017 until, on the market wave, it reached its absolute peak of $371 on 19 December and then repositioned at $80.

The 2020 pandemic hit the entire sector hard, but, against all scepticisms, once again demonstrated its solidity by recovering faster than any other market. Today Litecoin is among the top 20 cryptocurrencies by marketcap.

Flappening is a pun invented by Charlie Lee in early 2018 to describe the moment when Litecoin (LTC) overcame Bitcoin Cash (BCH), the other Bitcoin fork, in terms of market capitalisation. It is inspired by the term Flippening, which is when the Ether Market Cap (ETH) will outperform the Bitcoin Market Cap (BTC). Lee has launched a real trend: today Flappening means overtaking all major altcoins. 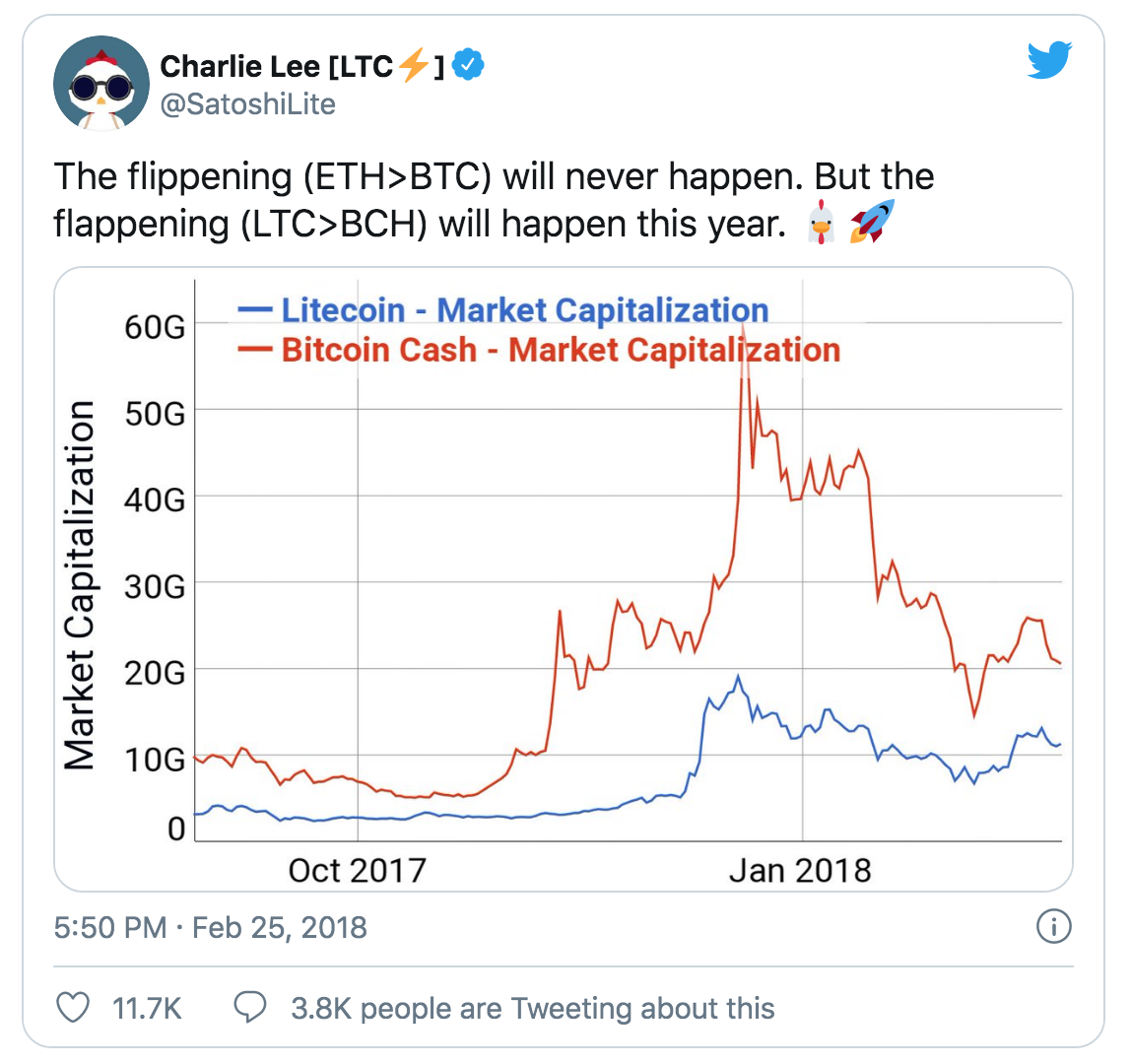 Like Bitcoin, Litecoin issuance is based on mining, a complex process in which new blockchain blocks are generated and new coins are created at the same time. Its protocol, reducing transaction times by 75%, makes the mining process faster, generating a new block in less than 3 minutes while Bitcoin takes 10 minutes.

An algorithm for individual miners

As for the Proof of Work (PoW), Litecoin uses the Scrypt algorithm while Bitcoin uses SHA256. By adopting Scrypt, Lee wanted to favour miners using CPU cards, i.e. those of a normal home computer, allowing them to mine easily both bitcoin and litecoin. The final aim was to guarantee a more equitable distribution of the mined coins, avoiding to concentrate them in the hands of the big mining pools.

Like Bitcoin, Charlie Lee’s blockchain also entails halving, i.e. the programmed reduction in the miner’s reward. This happens every four years for both coins, respectively every 840 thousand blocks for Litecoin and 210 thousand for Bitcoin. Halving allows avoiding the inflation of the currency. To learn more, you can read the article Halving: Why Bitcoin Is Immune To Inflation.

In September 2020, during an online event organised by the Litecoin Foundation, Charlie Lee and Stephan Vogler, CEO of CipSoft, announced the launch of LiteBringer, a blockchain-based fantasy role-playing game.

The game is completely decentralised, in fact, each user will use a node on the Litecoin network to play and every move made in the game will be a microtransaction on the Litecoin blockchain.

The interesting thing is that levelling up your characters and finding rare items gives you the opportunity to trade these achievements on the secondary market within the video game and earn Litecoin.

Gala Games: power to the players

What is the Gala crypto? The main incentive token in the Gala Games blockchain gaming ecosystem.

What is fiat currency?