SushiSwap: the Token for the DeFi Community

SushiSwap is a Decentralised Exchange with an automated liquidity system (AMM). The governance token of SushiSwap is Sushiswap (SUSHI).

How Sushiswap came about

SushiSwap is one of the first DeFi projects that directly mirrors UniSwap, a decentralised exchange online since 2018.

SushiSwap was born in September 2020 as a fork of UniSwap, from which it directly took the code and the basic interface.

Initially, there were only two anonymous developers behind the project, known only by their Twitter aliases: 0xMaki and Chef Nomi.

To gain a user base, the two developers formulated a plan aimed at all UniSwap users.

The plan was to offer Uniswap users a large reward for transferring any tokens they had locked on UniSwap to SushiSwap. In this way, SushiSwap was able to acquire at launch not only users, but also liquidity to support the operation of the exchange and consequently significant trading volumes.

This operation was referred to as a ‘vampire attack‘, as SushiSwap was able to literally drain UniSwap’s liquidity and volumes.

What does SushiSwap have more than UniSwap?

In addition to the initial reward offered for transferring liquidity tokens from UniSwap, SushiSwap differs in several respects from its predecessor.

Whereas UniSwap was initially very dependent on the decisions of its founder and then of the core team, SushiSwap broke in with the promise of giving governance directly to the community (more on this in the following).

So SushiSwap distinguishes itself first and foremost in being community-driven.

The second aspect, closely related to the first, is that SUSHI was launched even before the UNI token.

The presence of a token that supports the ecosystem is a fundamental added value for a DeFi project, a sector largely fed by the crypto market. By contrast, UniSwap, still without its own token, allowed neither speculation, staking nor truly decentralised governance.

Even today (August 2021) after UNI’s arrival on the market, there is no staking functionality for UNI on UniSwap.

Over time, further differences will emerge in the offers of the two platforms, both of which are developing unique features.

DEX and AMMs: what does it all mean?

As mentioned above, SushiSwap is primarily a Decentralised Exchange (DEX), i.e. a cryptocurrency exchange platform that is not controlled by any intermediary or company, but is completely reliant on smart contracts and algorithms. In the DeFi sector, the exchange or conversion of cryptocurrencies is called a ‘swap‘, hence the platform’s name.

Decentralised exchanges have always had the problem of liquidity. In order for traders to be able to execute orders at any time, it is necessary to always have a large and active supply and demand on all assets. In other words, you need to have liquidity available at all times.

Centralised exchanges (CEX) use market makers for this and generally rely on the order book model for order execution and pricing.

You will now ask yourself “why don’t decentralised exchanges do the same thing?”.

The answer would require a much longer article. Suffice it to say that this model, applied to a decentralised exchange, would be very expensive, slow and would compromise its usability.

Companies or organised entities that facilitate trading as they are always willing to buy and sell a cryptocurrency.

In practice, the user trades with a smart contract, not with other users.

However, the AMM alone is not sufficient to carry out token swaps, it needs to have stable token reserves that provide liquidity to the exchange.

Each liquidity pool corresponds to a market. For example, there is the DAI-ETH pool, from which the AMM takes liquidity to execute orders on the DAI-ETH pair.

Anyone can provide liquidity to a pool by locking their tokens in the corresponding pool. In return for this liquidity supply, you get part of the transaction fees that users pay to swap tokens on the DEX.

This incentive system for liquidity providers can also be found on other similar platforms such as UniSwap and Curve.

The most important Yield Farming formula, on the other hand, is SUSHI staking, which allows you to receive a fixed reward if you lock in your SUSHI tokens.

Yield farming includes all instruments and protocols that enable the generation of passive interest through the use of cryptocurrencies (lending, staking, liquidity mining).

Sushi is developing other increasingly sophisticated Yield farming formulas, which we’ll be happy to discuss in the future.

The SUSHI token was first created on 28 August 2020, on the Ethereum blockchain, so there was no pre-mined supply. Its main role is to give voting rights to community members who use it on the protocol.

SushiSwap is in fact governed by its community through forum discussions or through proposals and voting. Major structural changes and the use of project funds are voted on by the community, while smaller changes affecting the operations, or pairs available on the various SushiSwap features, are decided by 0xMaki and the core team.

This community-core team setup is intended to become a real DAO in the future.

Something new is on its way

According to the Updated Roadmap for Q2 2021, SushiSwap will upgrade many of its features, first and foremost the AMM protocol, Version 3 of which will be called Trident.

As reflected in its many partnerships, SushiSwap is also collaborating in close contact with other DeFi projects such as Yearn and Aave to provide services that are compatible with other platforms and foster interoperability between blockchains. 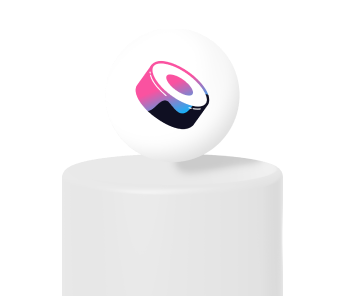